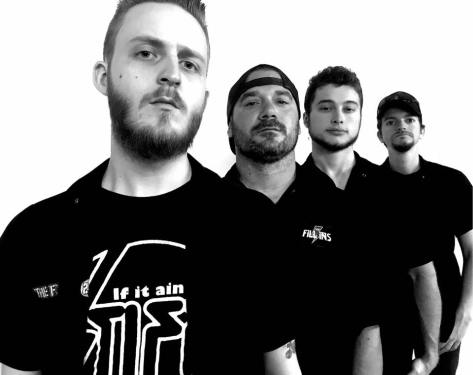 Although their lineup has changed undergone some significant changes throughout the past 7 years, The Fill Ins have always been dedicated to being a hard rock band specializing in catchy guitar riffs and an unapologetic attitude. New members have brought new expertise, and the band continually pushes themselves to improve their craft.

In the late Spring/early Summer of this year, The Fill Ins released “Lock and Load,” the first single off their most recent release, The Time is Now. The band had originally planned to release “It’s A Blast,” going as far as planning the artwork for the release, but decided to switch it up last minute. With 2 years between The Time is Now and their previous album, the band wanted to send fans a clear message that they weren’t slowing down anytime soon!

The Time is Now is a testament their growth as a band. Armed with a common vision and a good amount of trust in their bandmates, the recording process was much less stressful. The band was able to successfully capture the attitude and power of their live shows on the album, and they’ve included some surprise tracks for fans as well. “Gold Digger” shows off their love for 70’s and 80’s rock, “Feelin Good” sounds like it came straight off of a dive bar’s jukebox, and “Hate” is a nod to the classic metal and thrash bands that inspired their harder edge. Fans who have been with The Fill Ins from the start will surely be impressed with their range on this album.

Fans can expect their live shows to remain true to their recorded material, although time and experience means older songs like “Let Go” and “Save the Rock” sound more polished and powerful that they did in their earlier days. For more on The Fill Ins, their new album, and tour dates, click here.