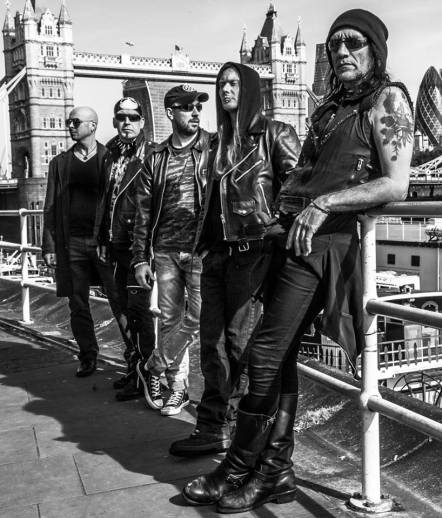 We would like to introduce everyone to Maxdmyz, a metal band from London and South East.  These guys love to party, chill out, and make music about things that piss them off.  They sound like my kind of people!  The current lineup has been together for about three years, but the band has continually evolved since their formation in 2000.  Vortex (keys) says it beautifully when he states, “like a rolling stone gathering moss – every influence negative or influence colours and changes the music. It’s range and depth has widened, in some ways simpler, in some ways deeper.  I think overall the music has remained immediate and connective, albeit more textured and complex.”  These guys truly enjoy playing live, working together to perfect their craft, and create new, innovative material for fans.

Despite the fact that in an ideal world they would be touring with Aerosmith or Black Sabbath in their prime (has trouble ever looked so fun?), singer Twister confessed that the thing that originally made him want to become a musician was watching the Fab Four run around in a car park in their wildly successful Hard Day’s Night.  While their style is a huge departure from The Beatles, Maxdmyz has been working like dogs and enjoying every minute of it.  According to A’Zedd, the band loves experimenting with their recorded material and altering its composition for their live shows.  The evolution of the music is organic and doesn’t come off as overzealous.  The band knows that fans look forward to certain songs and don’t want to ruin them by taking too many creative liberties.

It’s always satisfying to see people living their dreams, and the guys of Maxdmyz are doing just that.  Fans can always tell when a band enjoys themselves, so I can only imagine what a Maxdmyz show would be like.  Hopefully we will be able to revel in the excitement of their live show sometime soon in Chicago!

Check out some extra tid bits below, as well as their Bandcamp here.