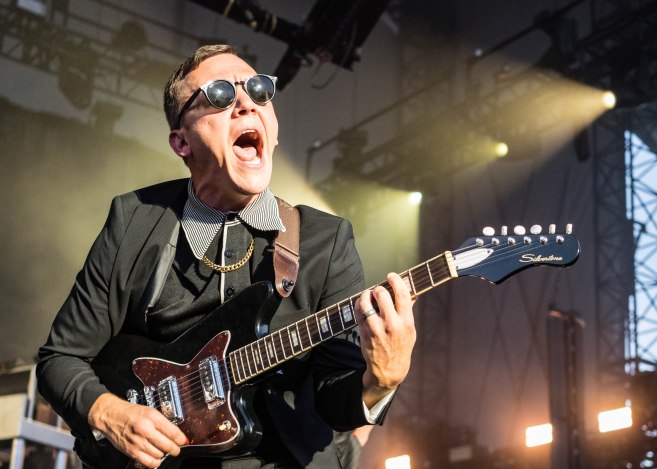 Controversial opinion: last night’s lineup at Nortlerly Island consisting of Wild Belle, Spoon, Cage the Elephant, and Beck is better than any single day lineup at Lollapalooza this year. There, I said it! I may have not been able to get off of work in time for Wild Belle and Spoon yesterday, but I have seen both of those bands in concert and know that they bring the heat just as much as the Cage and Beck. 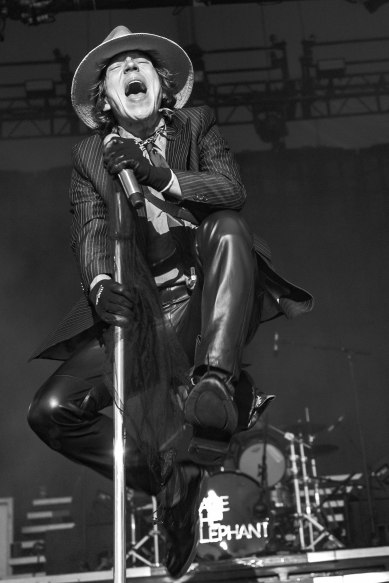 Cage the Elephant has been one of my favorite bands for many years now. Not only does their music make me want jump around and sing like a maniac, but they are my absolute favorite band to shoot due to their riotous live energy and committment to making every show memorable and special for fans. Going into last night’s show, I wasn’t sure if we were in for a typical Cage show. Not only was the band co-headlining and sharing fans with another well-loved act, but their most recent album Social Cues tackles heavier topics than their previous ones. With singer Matt Shultz going through a divorce and dealing with the loss of people close to him, this album is especially personal and vulnerable. When it came time for their set, they started the night off with “Broken Boy”, as Matt moved around the stage with a mesh-wire face mask and what looked like black tulle over his own face. Even though I’ve grown used to them starting with the adrenaline pumping “Cry Baby”, the props and slightly more subdued attitued made sense as he belted out “Broken boy, how does it feel?!” Between songs, Matt had a very real moment with the crowd when he told us that “it’s okay to be broken” and that he is sometimes still scared shitless in front of a large crowd. Encouraging everyone to embrace and work through their feelings as they make their way through life, he ended the little chat with, “let’s love who we are!” The band brought their signature energy to songs like “Crybaby”, “Spiderhead”, “Mess Around”, “Ain’t No Rest for the Wicked”, “Back Against the Wall”, “It’s Just Forever”, “House of Glass”, “Come a Little Closer”, “Shake Me Down”, and “Teeth”.  Holy Hell, that’s half of the setlist! I hope they carb loaded before the show.  Other songs like “Cigarette Daydream” and “Trouble” had the crowd singing along as best as they could. The set went by in the blink of an eye, and special effects on the stage, wardrobe changes (wardrobe shedding?), and adventures out into the crowd kept everyone’s attention. The thing that had people abuzz for about a half hour after the set ended, however, was the fact that Matt Shultz crowd surfed back to the soundboard (which he climbed) and then farther back to the massive lighting towers (which he also climbed) all while “We Are the Champions” was blasting out of the speakers. After coming down, he had some cute moments with fans as he surfed his way back up towards the stage. They are truly one of the best live bands of this generation and their dedication to making great music and memorable experiences is unparalleled. 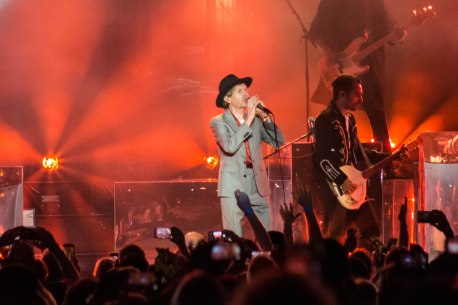 Cage is always a tough act to follow…unless of course you’re Beck and have a discography that spans 26 years and have mastered various genres of music. Seriously, Beck is an artist that never ceases to surprise me. He don’t really fit any mold because he is constantly revamping his sound and experimenting with different genres. Being at his set reminded me of how many hits he has had over the years, and it is quite spectacular. He played songs from all througought his career and even included a sprinkling of covers to sweeten the deal. Towards the end of his set, Beck had Spoon singer Britt Daniel join him on a cover of Elvis Costello’s “Pump it Up.” Cage the Elephant’s Matt Shultz came back to the stage for their song “Night Running” (one of my favorites on the new album) and part of “Where it’s At” as well. The visual effects he used on the stage perfectly complimented each song on the set. His 1.25 hour time on the stage never lost steam, and Beck kept it weird and funky, as one would expect of him. 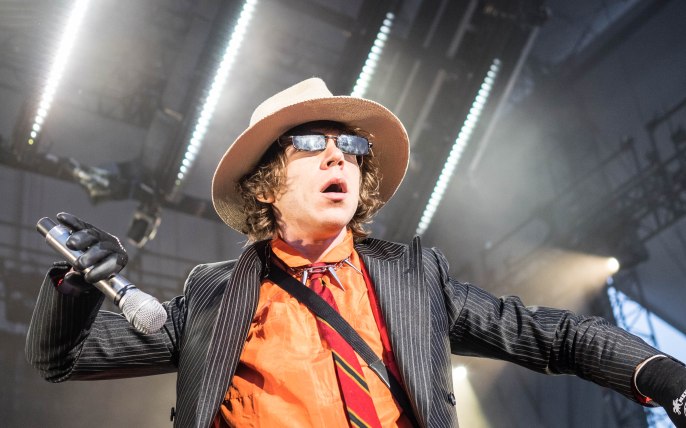 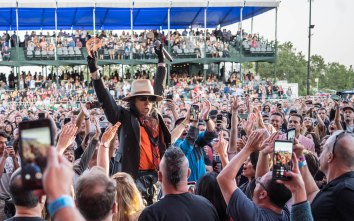 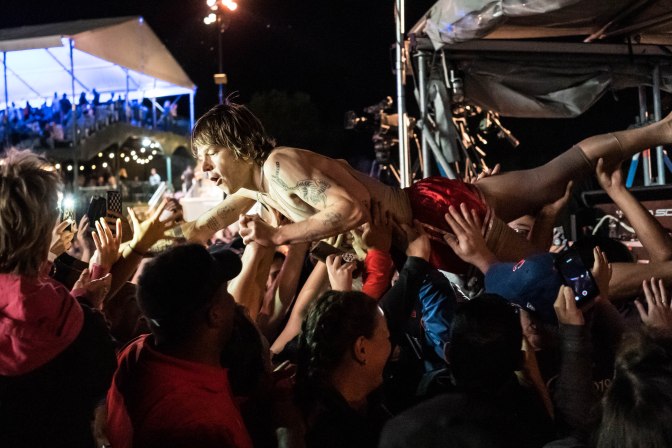 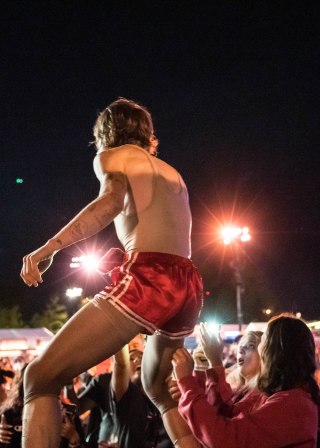 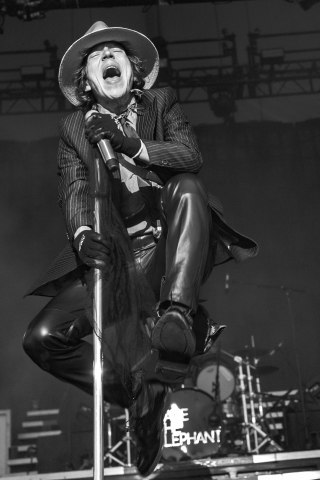 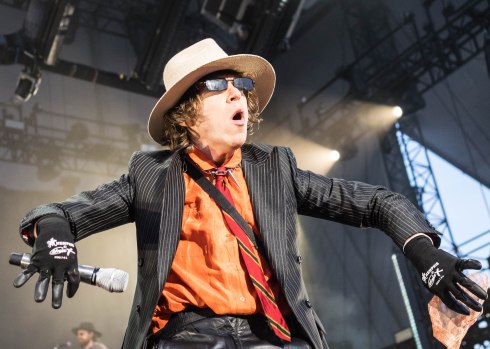 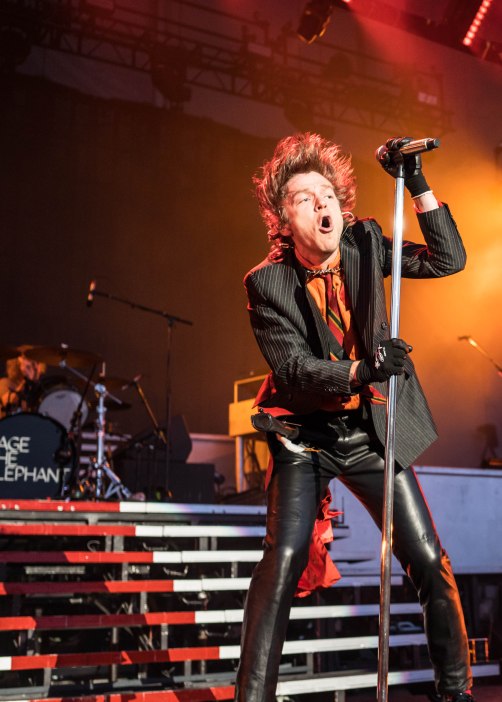 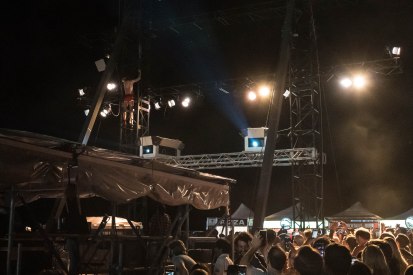 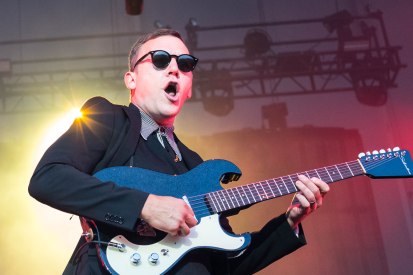 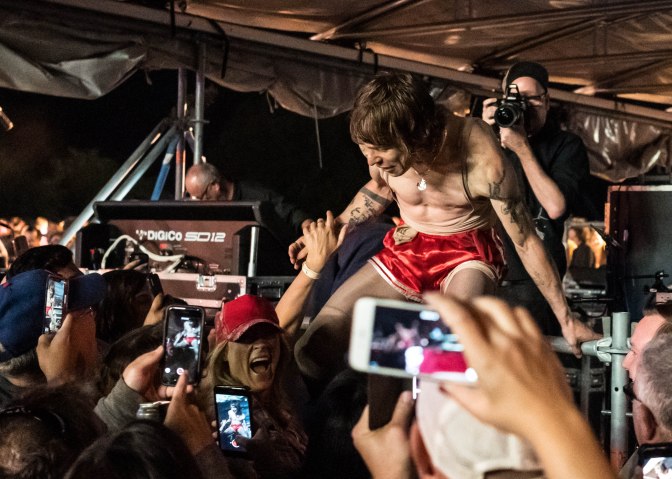 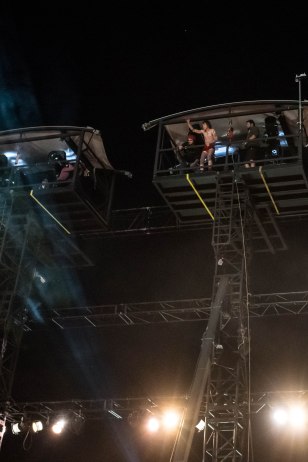 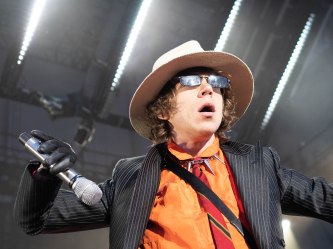 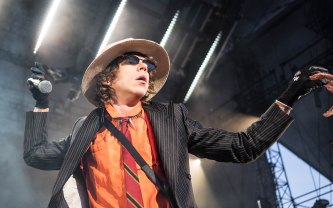 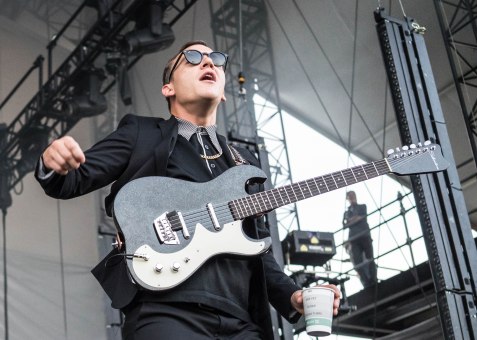 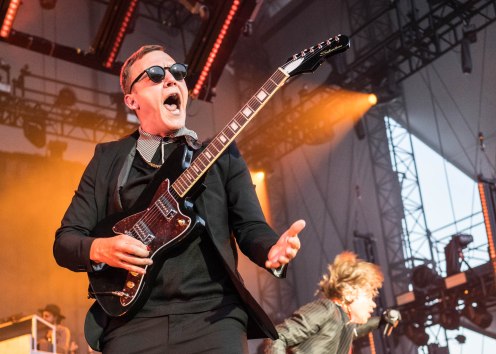 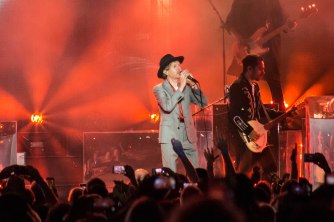 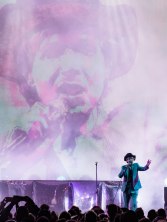