Barely a year old, Better Oblivion Community Center played two sold-out nights at Lincoln Hall.  Comprised of Conor Oberst, of Bright Eyes fame, and Phoebe Bridgers, you could see the friendship on stage.  This did not surprise me given the theme of the band focuses around community and belonging.  As they opened the show with their current single “Didn’t Know What I Was in For” you could see the two bounce smiles off of each other.  Throughout the concert, the two sang ghostly harmonies that resonated with the crowd singing.  Although this was the band’s first tour, there was plenty of thought put into the production.  Bright, colored lights blasted through the haze on stage, even coming out of the band’s logo.  This blended perfectly with the ghostly pop music that came out of the speakers.

To please the crowd even more, Phoebe and Conor played a couple of their respective original songs during the encore.  Overall, the band put on an impressive show playing like they have been playing together for a decade.  You could see the real friendship playing together, something you don’t see too often these days.  They talked about writing another album, so when they come into town again be sure to grab a ticket because it will be sure to sell out quickly.

Photos and review by Mike Jahn 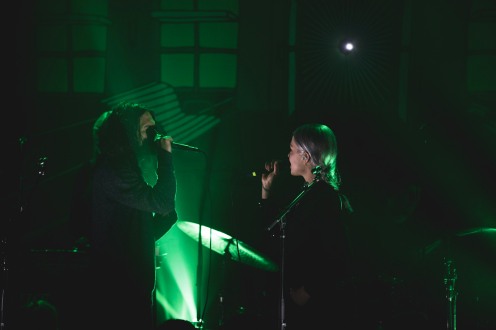