The former Brooklynites of Lucius played Thalia Hall this past Tuesday to a dedicated group of fans. The band’s most recent release, Nudes, is their first compilation album in which they rearranged previous songs, stripped them down to make them acoustic, and even threw in a few covers and new originals. Lucius opened the show with one of my favorites, “Go Home,” from their debut album, and their whopping 19-song setlist had the fan swaying, singing, and giggling between songs. As always with Lucius, banter between the singers and the crowd had everyone laughing. After one of the more hilarious moments, they said, “IDK, let’s sing a sad song,” which made everyone laugh even harder! Their performance was stunning. The the music was crisp and rich, and the lyrics were perfectly harmonized and the hang time in the notes they sang had everyone on the edge of their seats. After hearing how well-prepared the crowd was, singer Jess Wolfe looked at her counterpart, Holly Laessig, and said, “I think we’re gonna have to keep them, Holly. You guys seem to know your stuff! …there might be a quiz later.” Towards the end of the night, there was a sweet moment when they talked about how important it is to be kind to each other and to live in the moment during these crazy times. Great advice from wonderful, talented people! If Nudes is to be considered the bridge between where they’ve been and where they’re going, we are in for many more years of beautiful music. 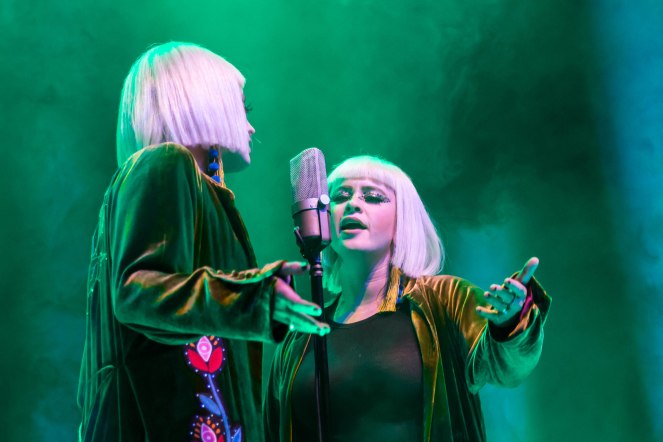