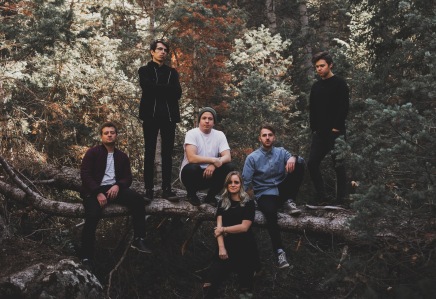 Cinders, the six-piece indie pop band out of Salt Lake City, has been making a splash for the past two years as they entered music scene . While a few of the band members had played together in previous projects, they all agree that their current lineup fits together like the two half-hearts of a BFF necklace.

Vocalist and guitarist Jordan Zabriskie has evolved over the years as both musician and a lyricist. Originally inspired by the bands his bother exposed to him as a kid, Zabriskie’s lyrics matured from dramatic songs about teenage angst and drama to more sophisticated and purposeful lyrics.

Comparing themselves to bands like The Front Bottoms and Grouplove, Cinders has worked tirelessly to create melodically complex, relatable, and catchy songs for new and old fans alike. Their live shows bring fans of all walks of life together for a memorable night of music. Although their first album is pretty laid back, their shows are often compared to punk shows due to the output of high energy coming from the band. Cinders’ most recent album attempts to capture their Rowdy-Acoustic-Pop sound, and their new song “Treehouse” is a perfect example of what the band hopes achieve with the album. In an interview with Jordan Zabriskie, he told us about some of their more memorable gigs:

What’s the best gig you every played?

I don’t know if it was our best performance we ever played but  one of our favorites would have to be playing the Givestock Music festival with Dr. Dog. It was an awesome stage, awesome location, and awesome crowd. During our set we looked out in the crowd and we saw that they had printed and cut out giant heads of each of us and were holding them up through out the show! That was one of our most energetic shows as well. Plus they gave us unlimited sandwiches and Gatorade the whole day. That never happens so we definitely took advantage of that.

What is the weirdest thing to happen while you were on stage?

We played a packed show at this smaller venue in our home state. It was an awesome night and we were playing a couple brand new songs for the first time. It was a pretty late show and a few guys in the audience were getting pretty smashed. One of the guys only had one arm, and he was one of the nicest guys ever but he kept insisting that I poke him in his nubbed left arm. After every song he would say “Hey Jordan!…. Just um…. dude.. bro check out my arm man! Touch it dude!!!” And I don’t think I have touched another person’s arm in one night as much as that guy’s. We later became friends on Facebook.

Like most new bands, getting started and keeping momentum can be difficult. For Cinders, however, their biggest challenge as a band is also their greatest success. With no connections, money, or any idea of where to begin, the band relied largely on learning from experience as they went. If they failed, they tried again. If they were successful, they determined what made the difference and did it again next time. Fully aware that another talented, hard-working band could swoop in and take their spot if they start slacking off, Cinders is dedicated to putting in the hard work on a daily basis if it helps get their music out to more potential fans.