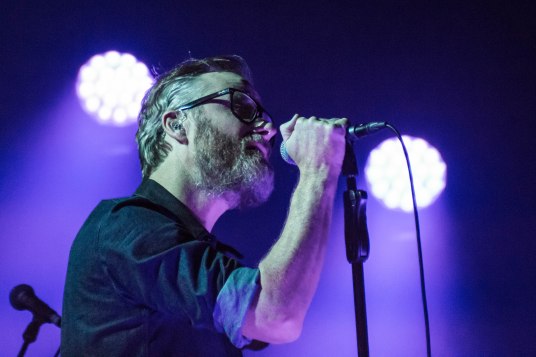 In the beautiful Civic Opera House of Chicago, one of indie rock’s most beloved bands, The National, set up camp for two nights to conclude their Sleep Well Beast tour for 2017.

Fans of The National are dedicated and passionate. Upon hearing that the band would be finishing their 2017 tour in Chicago, fans exclaimed that there could not be a more ideal way to end the year than with their favorite band in this special venue. One superfan, almost hyperventilating with excitement, confessed that he had been waiting 8 years to see the band because he wanted it to be perfect. For dedicated followers and casual fans alike, The National did not disappoint.

Chockful of energy and raw emotion, The National played a 22+ song setlist each night. Each one drew heavily from their 2017 release Sleep Well Beast, with the rest of the setlist pulling from their other six albums. That being said, the band varied their setlist each night to create a uniquely memorable experience for fans attending both evenings.

The National’s connection with fans is undeniable. During Tuesday night’s performance, singer Matt Berninger ventured out into the crowd twice–once during “Graceless” and another time during “Day I Die.” Getting up close and personal with one of their heroes left fans feeling exhilarated, lucky, and fulfilled. For the last song of Tuesday’s set, the band played an acoustic version of “Vanderlyle Crybaby Geeks” to which the entire audience sang along.

The National truly outdid themselves in Chicago. Their setlists were perfectly crafted, their visuals and lighting were stunning, and they created blissful memories for those in attendance.