Please excuse the absurd title, but those at The Chicago Theatre Wednesday night knew there was a lot of Ketchup trash talking and adoration happening throughout the set. After a long 6 years hearing nothing from Fleet Foxes, I was ecstatic to see that they were rejoining the music scene with their most recent release Crack-Up. Before their hiatus, I had not seen them live, so I was excited to see that they would be spending two nights in Chicago to support the album.

The air in the theatre was buzzing as the crowd eagerly waited for the band to come out. Everyone had spent years wondering if Fleet Foxes would ever play again, and now that they were back, we couldn’t wait to hear the new material live. As the band took the stage, singer Robin Pecknold commented that it was one of the most beautiful theatres he’s been in in the states. 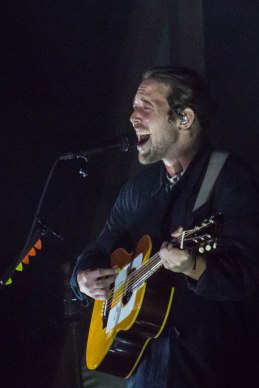 There was a lot of banter regarding Ketchup between the crowd and Pecknold who started the conversation by unexpectedly asking, “Ketchup is okay, right?” between songs. The Chicagoans booed him with gusto, and when it finally died down he calmly asked,”What’s up with Ketchup?” The conversation continued after the next song when he jokingly said, “What’s that? I can put Ketchup on anything I want? I can. And so can you if you just realize it.” As a person who puts Ketchup on green beans, I obviously agree, but I am clearly in the minority. He later in the set claimed to be drinking pure Ketchup instead of water between songs and starting singing a song about Chicago’s least favorite condiment on the spot. Little did the band realize that Ketchup would be the theme of the last show on the tour.

More importantly than Ketchup, the band’s set was amazing. Their songs were woven together effortlessly as the end of one song slowly evolved into the start of the next. Without many breaks between their songs, the band took us on a journey though their albums and made us feel a wave of different emotions with each song. Each of the band members jumped between instruments throughout the set, showing off their musical prowess. At one point, I realized that the drummer was drumming with one hand and playing the trumpet with the other. Who does that?! The vast number and array of instruments created a rich, booming sound that engulfed the entire theatre. Pecknold’s voice is honestly unbelievable and I kept wondering how it was possible that someone could actually have as pure, crisp, and powerful a voice as his. He played three solos during the set that left the entire theatre silent and engaged. The 25 song, 2 hour setlist was soul-lifting and gave me the chills multiple times. I’m so glad this band is back and sharing their music with us again. Enjoy the next leg of your tour, boys!