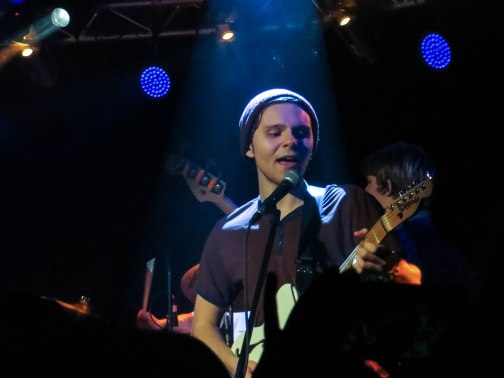 Whenever I am at a show where one of my all time favorite bands is playing I always think, “My God, can you imagine how amazing it would be if they played a small, private show for their biggest fans?” For the fans that know their earliest albums, all the lyrics, and queue up hours before the show just to secure a spot at the barrier?! While I understand that it would be impossible to determine what makes someone the “biggest fan,” I had the absolute pleasure of attending a JBTV recording of The Orwells, and I think this is the closest we will ever get to that dream scenario.

JBTV is owned by Jerry Bryant who has hosted and interviewed up and coming bands for the past 30 years. Through the show, bands like Smashing Pumpkins, Green Day, 30 Seconds to Mars, and No Doubt received their first TV exposure. Since its original conception, the show is now broadcast online in addition to their regular TV slot.

On the night of The Orwells show, fans were lined up down the street and around the corner in the

hopes that they would be allowed into the show. JBTV shows are free to the public as long as you RSVP in advance. However, if you really want to make sure you get in, you need to line up early and hope that you are one of the lucky ones admitted into the studio. Who else would do this except for a band’s most dedicated fans? Chilly hopefuls yelled and shouted as the camera crew zoomed past them, and the energy and excitement was palpable in the winter air. Once inside, I’m pretty sure you could spend a whole day looking around at all the memorabilia from noteworthy bands who had previously played JBTV. When it was time for the live recording, fans crowded into the small room and were told the rules (which were pretty much non-existent). There was to be no alcohol or messing with the cameras or band members, but apart from that we were free to crowd surf, stage dive, and cause a ruckus. All hail the JBTV showrunners who understand that live music makes people excited and don’t try to suppress it.

The Orwells played a ~35 minute set to an excitingly wild crowd. A new 7-minute song was played that had a very menacing feel to it, and they treated fans to an encore. It was scrappy, it was energetic, and it was raw. I left feeling refreshed and thankful that fans and musicians alike have such a wonderful place to share their music and vision. To check out any upcoming events at JBTV, click here. If you’ve already RSVP’d and want more specifics on what happens during the live shoot, click here.