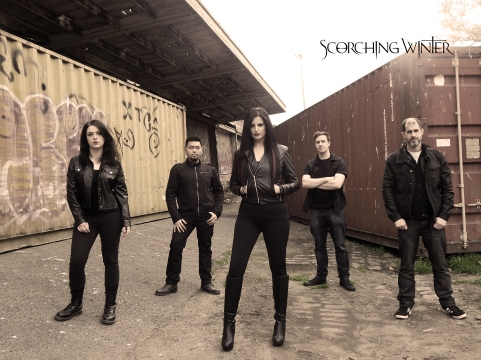 Seeing as we are about to be slammed again with snow, I thought it was a fitting time to introduce everyone to Scorching Winter, a five-piece, female-fronted rock band from Australia.  Guitarist Rafael Katigbak and drummer Nick James started the band back in 2012 as a fun project, but the current line up is only 2 years old.  The band released their first EP, Peripheral, a hard rock / old school metal album in 2015.  Since then, the band’s music has become darker, heavier, and more progressive.  Their evolution was not a conscious decision, but more of an organic one.  After being exposed to different types of music, perfecting their craft as musicians, and various lineup changes, the band’s sound shifted naturally to a fiercer sound in time for their second release, Victim.

When playing live, the band strives to replicate the sound of the album without many alterations to the lyrics or song composition.  Since they are still a young band, they don’t want to play something for new listeners that they couldn’t take home on one of their records.  One unforeseen, unintended change to the band’s sound happened when playing live at a little bar.  During the show, the bass guitar became overpowering and deafeningly loud.  The band had to put the show on halt to find out what was going on with the audio malfunction only to realize that the venue’s sound guy had leaned on the bass’s volume control while on his phone.  While I’m sure the sound guy was mortified, the band recognizes that it’s just a hazard of the trade when you’re a band that’s just getting started.

For more on Scorching Winter,  check out their website here.