Not going to lie, I was in a pretty awful mood when I set out for the KONGOS show last week.  My family had just put one of our dogs to sleep, and part of me wanted to curl up in my bed and call it a night.  I instead dusted myself off and headed for The Vic because if anything was going to make me feel better that night, it was music.

I had never seen KONGOS live before, but the layering of their music was all encompassing and rich.  To me, the addition of the accordion is such a game changer.  Considering very few bands use an accordion in their albums, this immediately makes their sound unique and memorable.  The drums added a tribal feeling, and the brothers’ chorus of voices along with using a slide on the guitar gave the performance a very raw feel.  The guys put their own funky spin on one of my favorite Beatles songs, “Get Back,” which was a complete treat.  The fans ate everything up during the show, and their singing almost drown out that of the band a few times.

This concert was exactly what I needed that night.  Thank you, KONGOS! 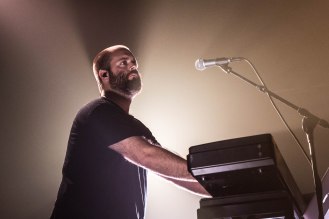