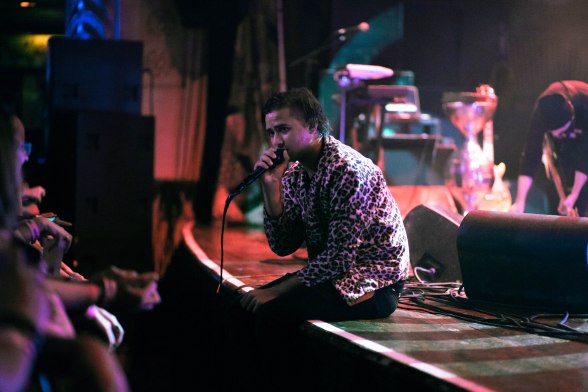 This past Father’s Day, I was able to attend and photograph the punk rock band Raw Fabrics and American musical duo She Wants Revenge at the House of Blues Chicago. The opening band, Raw Fabrics was an enjoyable and lively band with a lot of heart and emotion in their lyrics. The song “Get Me The Hell Out Of Here” was probably the most profound song for me as it did exactly the opposite of what the song’s title demanded. It instead drew me, and the rest of the audience, into the song. As the band chanted the song’s title, the audience was drawn in even more.  The fun atmosphere that the band produced was unique and infected the crowd as they danced to the beat of the drums. The Raw Fabrics performance was overall very energetic and they freely showed their passion for the music and performance.  I would definitely see them again next time to come by Chicago.

The headlining band, She Wants Revenge, also put on an entertaining performance. I couldn’t really pick out a

favorite song from their set, because they were all very enjoyable. The band has a very unique sound, and the emotions conveyed by the band added an interesting twist to the songs they played.  The crowd was eager to participate and joined in on their performance by singing along, which made for an amazing atmosphere.  The band took concert-goers on a roller coaster of emotion, making them feel be joy, sadness, or anger. The bands were exceptional.  They kept the crowd engaged and made it a great night for any in attendance, the venue was a great fit for the bands, and the fans were loving it all.

Photos and review by Brian Fuentes