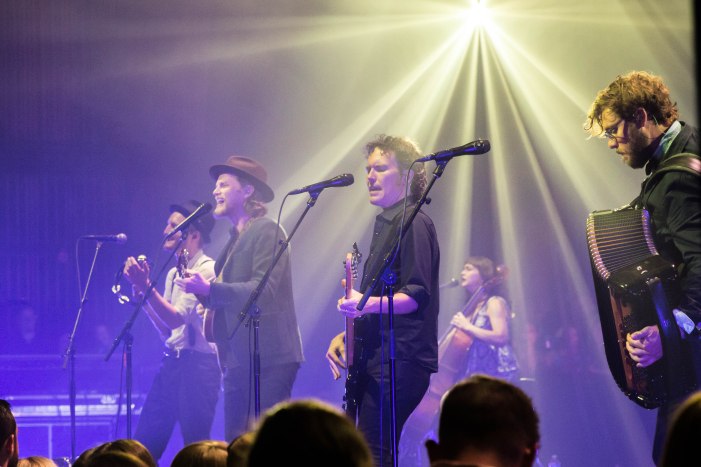 The Lumineers closed out the current leg of the U.S. Cleopatra Tour in our lovely city of Chicago with Sleepwalkers and SOAK.  It was a special night filled with beautiful music, lots of crowd participation, singing, storytelling, and confetti. 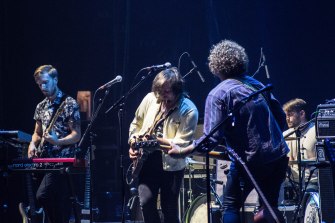 Sleepwalkers of Richmond, VA were first on the bill.  Although the theatre was still fairly empty when they took the stage, it didn’t stop the band from playing anything less than their best!  The band’s sound was rich and full, and their vocals were on point.  Those who were in the theatre at the time seemed to enjoy the band’s music which was upbeat with a retro feel.  The band was appreciative of both The Lumineers allowing them to share their tour and of concert-goers for coming early to listen.

Next up was SOAK.  Headed by Irish singer-songwriter Bridie Monds-Watson, the band played a great set as more fans flooded into the theatre.  I was very impressed by the vocals, which were powerful, clear, and smooth.  Accompanied by two other musicians, their set was full of sweeping melodies that resonated through the entire theatre.

The Lumineers took the stage to a crowd that did not need to be won over.  The crowd at this show was great—eager to sing, dance, and show love to the musicians on the stage.  For those who also saw them the night before at PIQNIQ, the shows differed in a few ways.  One of the most obvious differences was that while they were only 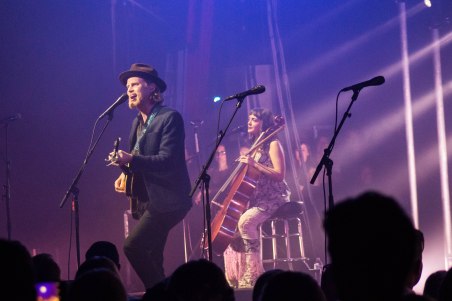 allotted 45 minutes at PIQNIQ, they band played for an action-packed hour and a half on Sunday night, allowing for more material, and more time for crowd interaction.  Additional songs included Dead Sea, Charlie Boy, Gun Song, a special Father’s Day version of Long Way From Home, Scotland, and In the Light.  The band played a Bob Dylan cover, and sang Ho Hey and Darlene with the help of fans and opener musicians without the use of any microphones.    Similar to their PIQNIQ appearance, signer Wesley Schultz ran through the crowd during Ophelia, and fans went nuts!  They band also played a sped-up version of Big Parade, and ended it all with one of the songs that got them started—Stubborn Love.  Their performance was heartfelt, and non stop.

It was a great way to end Father’s Day weekend.  For more photos, click here.