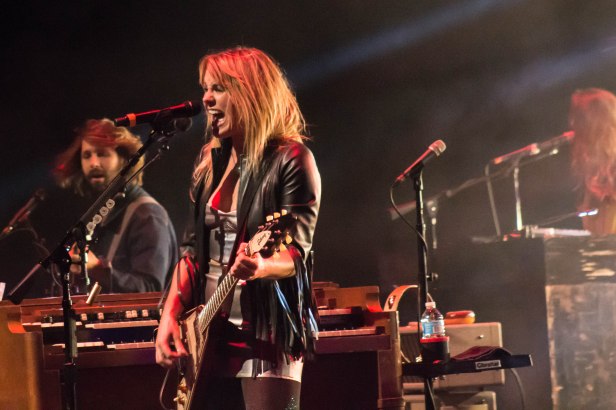 Grace Potter…perhaps one of the only people in which both guys and girls want to be her or be with her.  The girl has swagger, she has talent, and she knows how to have a good time with her fans!

I remember seeing Grace Potter for the first time at Lollapalooza 2011.  I had heard of her and the Nocturnals, but I had never listened to their music.  Since she fell in one of the few open spots I had on my strict weekend schedule, I agreed to go.  Their set started, and I was almost immediately outraged.  Why had no one told me to listen to this band sooner?!  I am not usually a fan of female leads, but  Grace Potter was ballsy.  She rocked out on an electric guitar with the boys, played piano, and had a voice capable of holding its own with no backing music.  Their set was filled with music from all different genres, another testament to the talent of the band.  When I got home that night, I quickly went to listen to their recorded material, but felt that it lacked the depth of their live performance.  I saw Grace Potter and the Nocturnals once more before her solo debut, and again, she did not disappoint.

When I arrived at The Chicago Theatre, I was incredibly curious as to how a show without the Nocturnals would pan out.  The set shifted between her material with the Nocturnals (which made up the majority of the setlist) and her solo material, which provided fans with more danceable, electronic tracks previously unobserved with Grace Potter and the Nocturnals.  Grace moved between various instruments throughout the night, excelling at each and every one of them.  When she was not playing guitar, organ, tambourine, or drums (we will get there), she was belting out songs and dancing across the stage in the most carefree fashion. 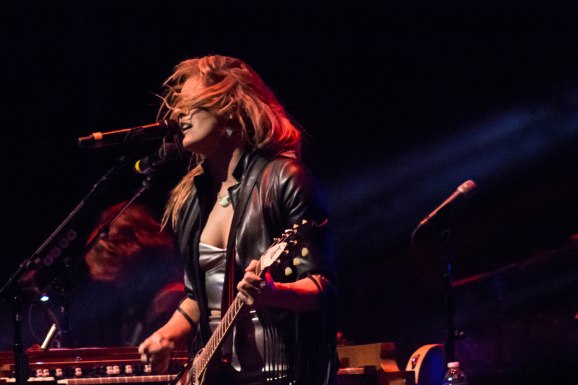 Grace’s fierce, non-stop stage presence helped keep the energy high and even got the older people in the crowd a little frisky.  No joke, I have never seen so many men with their hands on their girlfriend or wife’s butt.  That’s just one of the many powers Grace has over fans!  At one point between songs, she made a speech about standing v. sitting at a show.  While she assured fans that it was perfectly fine to remain seated and dance in their minds, she suggested not getting “bummed if there’s someone dancing in front of you for real.”   Before playing one of Grace Potter and the Nocturnals more famous songs, Medicine, Grace invited fans to come down the aisles toward the stage for a dance party.  Let me tell you, there was a stampede of about 30 guys running down each aisle, some even pushing each other out of the way to get closer.  Their girlfriends must have loved that!

Opener Rayland Baxter joined Potter and her crew on stage for the first encore song, Apologies.  Although Baxter seemed high as a kite, their voices melded perfectly and brought life to the song.  After Baxter skipped off stage, Potter continued with The Lion The Beast The Beat, complete with an all-band percussion interlude, and then finished off the night with what started as My Kind of Town and turned into Paris (Ooh La La).

I decided back in 2013 that I wanted to be Grace Potter when I grow up, but was immediately bummed when I remembered that I have no musical talent.  Instead, I now feel lucky that Grace Potter shares her talents with all of us.  She is a great role model and a talented human being.  In the mindset that I will be reviewing the shows I attend, I am constantly texting myself during concerts to remember what I’m taking in.  The last thing I texted myself was, “clearly the Yoncé of the rock world.”  I stand by it!