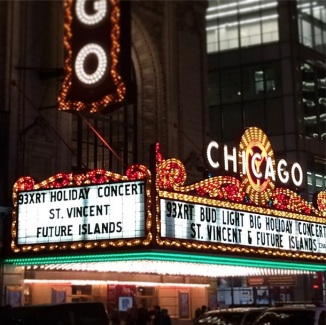 Oh man, what a night!  While I was officially only on duty for Future Islands, I figured I would include St. Vincent in this since she totally kicked ass.

I had never seen either band perform live in person, but I had seen videos of Future Islands from various festivals, and I caught St. Vincent when she was on SNL.  Needless to say, both had my attention rather quickly.  Whether it was because of their stage presence or their unique sound, I was thrilled to see that they were both playing together on the 2nd at the Chicago Theatre.

Future Islands is known for their intense live performances, and their front man (Sam Herring) has quite the following for very legitimate reasons.  Armed to the teeth with entrancing dance moves, it was hard not to be sucked into the performance.  Occasionally busting out some sexy moves, Sam got the crowd up on their feet and dancing within minutes.  And his vocals are a whole other beast!  I have never seen anyone who could perfectly capture so many different emotions in such a small time frame.  Sam’s facial expressions and vocal inflections brought the emotion to the surface in a very primal way.  Sometimes tender and sporadically as if possessed by a demon, his vocals brought their music to life in a whole new way for me.  Future Island’s sound perfectly filled the old theatre, making any seat in the house a good one.  The band made the show more intimate as they talked about various songs and reached out and connected with their fans.  Before going into “Light House,” Herring told fans that the song was about something a friend once told him that saved his life.  Coincidentally, said friend was in the crowd pretty close to where I was sitting.  Their entire show was raw and powerful, and it came to an end far too quickly.  I can’t wait to see Future Islands on the Upcoming Events tab again!

St. Vincent has gone through quite the evolution since beginning her musical journey.  Not only musically, but her appearance and stage presence have also changed dramatically.  Opening the set with mysterious dance moves, I think everyone was on the edge of their seat trying to figure out what she would do next.  Turns out she gave an unbelievably fierce performance!  The whole thing is still so mind boggling to me because she’s such a tiny human, but her voice is crisp and commanding.  I’m also fairly certain that the majority of the concert-goers left with a strange desire to start playing electric guitar.  Outfitted in a sassy flapper-esque dress, at one point she jumped on someone’s shoulders and she played guitar as he moved her through the crowd.  Who does that?!  Rocker chicks, that’s who.  Well done St. Vincent, well done.  I may have been initially turned off by your all things Chicago name dropping, but there’s no denying you put on a great show!