Everyone remember “Fat guy in a little coat” from Tommy Boy?  I can confidently tell you that Jaymes Young is the exact opposite of Fat Guy in a Little Coat.  And I don’t mean that Jaymes is a skinny guy in an XL coat, I mean his voice.  Holy smokes, that guy has a shockingly powerful voice!

Lincoln Hall was just starting to fill up Saturday night when Jaymes Young and his band came on stage to a crowd of mostly females, their boyfriends, and some bros (who zealously yelled “YEAAA JIMMMMY!” when they came out).  The stage was packed full with instruments and the crowd was ready to be bathed in beautiful lyrics and a captivating fusion of pop, electronic, and R&B music.

I was completely won over by Jaymes Young and his band.  Their talent is undeniable, and with such a unique sound, they are bound to appeal to a wide range of listeners.  Keep an eye out for this band!

As I looked around between sets, I realized that I honestly don’t think I’ve ever seen more females in a crowd apart from that one time I went to a Justin Bieber concert (don’t get me started).  Seriously, everyone’s hair and makeup was done, and they were waiting to see and be seen by Vance Joy and his mates.  Luckily, the boys can handle the heat!

Quick to please their fans, the band opened their set with Emmylou, one of the songs off of the 2013 EP God Loves You When You’re Dancing.  As the ladies stared dreamily into Vance Joy’s eyes, the crowd sang along to each of the songs.  It is still amazing to me that a man who used to be a professional football player could do a 180, completely switch careers, and be successful in both.  You would think a person with that much talent would be a bit full of themselves, but Vance Joy was extremely humble and handled the occasionally inappropriate shouts from the crowd with grace.  Up on the stage with his guitar, this big teddy bear of a man performed a few stripped down solos which made the already intimate setting even more personal.

Fans were even treated to the back stories on some of Vance’s songs.  Snaggletooth originated with Vance Joy’s fascination with singer/songwriter Sia.  While perusing her Wikipedia page with his brother, he found out that she has a snaggletooth which she chose not to fix.  He then went into a detailed description of the term “snaggletooth” which was quite amusing before jumping into what turned out to be a love song about a girl with a snaggletooth.  The song From Afar was written about one of his girlfriend’s (now ex-girlfriend for a soon-to-be-obvious reason) friends that he had a huge crush on.  Things suddenly make sense.  Lastly, Best that I Can captures one of his memories of his childhood in Australia.  When it was hot out, he said that his mom would call him and his siblings in and tell them to lie on the kitchen floor because the cold tile would cool them off.  Artists find inspiration everywhere—it’s always fun to learn the source! 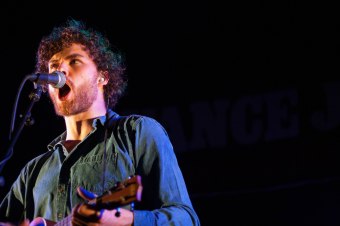 Backed by the full band, their music filled the entire hall with sweet, crisp melodies.  I found myself frequently watching the other band members, who seemed to be having as much fun (maybe even more?) as the crowd.  Getting giggly on the stage, they clearly had some sort of unspoken communication going on and it made me laugh too!

All in all, it was a night of beautiful music and good vibes.  Many of you have probably seen that Vance Joy will be opening for Taylor Swift during her 1989 tour this summer.  For a band that thrives on the intimacy of smaller venues, I will be very interested to see how Vance Joy and Co. do in the arena setting!