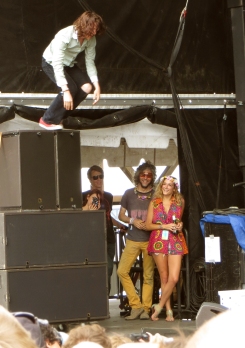 How do you know you’ve made it?  How about when Wayne Coyne of The Flaming Lips watches your set from the side of the stage and then takes a selfie with you?  Yeah, I would say you’ve made it.

Meet Foxygen.  Its founders, Sam France and Jonathan Rado, have captivated fans with their uninhibited creativity since 2005 when the band first formed.  Since then, they have acquired more touring members to help bring their music to life for live audiences.

I was immediately obsessed with the band’s first two albums and had heard tales of their crazy live shows, but nothing prepared me for what I saw at Forecastle Festival in 2013.  Wild musical interludes, crazy antics by lead singer Sam France, wailing vocals, and an utterly captivating show.  Lucky for select Chicagoans, the band is playing two sold out nights at Lincoln Hall this Thursday and Friday.  With the release of the band’s new double (yes, double) album, hopefully some of you scored tickets for both nights.

Foxygen’s new album …And Star Power is set to be released tomorrow, October 14th.  Broken into different sections, the band has really let the creativity flow without much censoring, and the result is about 80 minutes of beautiful chaos.  Retro fuzz, experimental psychedelic tracks, instrumental detours, and some random kid who introduces the “Scream: Journey Through Hell” section by telling us to hold on to our butts (a la Samuel L. Jackson in Jurassic Park).  I am constantly impressed by France and Rado who are able to make you feel a range of emotions in the span of an album, and sometimes within a single song, without fail.  Their ability to completely throw you for a loop mid song is incredible and one of the things I love most about them.  There are songs about love (of the lack thereof), seemingly nonsensical songs, and songs in full whimsical pop glory.  Sure, there are times in the album where you won’t know what the hell is going on, but you’ll still love it!

Order your copy of …And Star Power here.